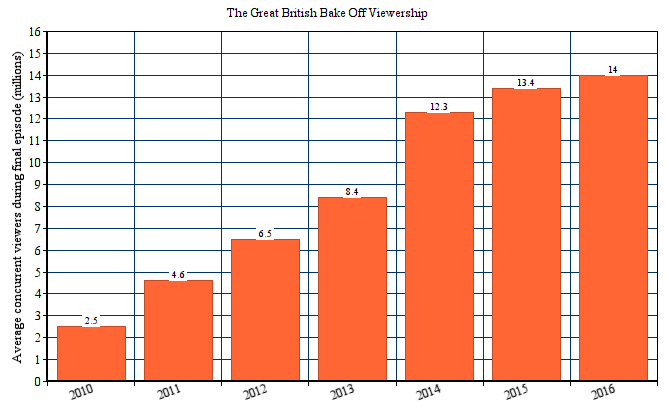 I think the show is so popular because of its format. It keeps some parts from MasterChef, introduced in the 1990s, but also adds its own twist. The MasterChef format is: cooking meets reality TV's cutthroat competition fueled by drama. It features professional chefs judging and eliminating contestants every episode. It's a recipe for great entertainment.

GBBO keeps the competitive structure from MasterChef, but makes it is much friendlier, and it tones down the ruthlessness and drama. The judges themselves admit that it appeals to children, grannies, workers, everybody, because it's gentle. For example, when a MasterChef contest starts, the contestants run throughout the kitchen to grab tools and ingredients right away. In contrast, the GBBO contestants are given their own appliances and ingredients, and choose their own recipes for their Signature and Technical Challenges. They are often caught on camera comforting each other and joking with the two comedians, who add comic relief to stressful situations (although some viewers could find their humor cringeworthy at times). In the finals, they keep 3 contestants as opposed to only 2, so that losers congratulate the winner right away instead of being disappointed.

GBBO has only two judges, not three. Other competition shows like Britain's Got Talent have three because they vote on accepting or rejecting a contestant. This vote is public and recorded on camera sometimes with much drama. The GBBO judges on the other hand are always deliberating privately, and nearly always reach a consensus on who they're kicking out.

Another appealing feature of GBBO is the setting of the competition. MasterChef takes place in a warehouse, with lots of steel accessories. It looks stressful. GBBO takes place in a luminous tent placed in a very green and bucolic countryside. The transitions between Challenges are shots of sheep and tree leaves. It's a much more pleasant viewing experience.

The protocol at the end of each GBBO episode also focuses on the positive parts. They first announce this week's Star Baker, which awards a silver Sheriff star to the week's best baker (Star Baker was added in Season 2). Star Bakers wear the star in the next episode, until the next Star Baker is announced. After the Star Baker is announced, they call the contestant who is eliminated. At that point the two comedians and a bunch of the other contestants hug them, sometimes in tears. 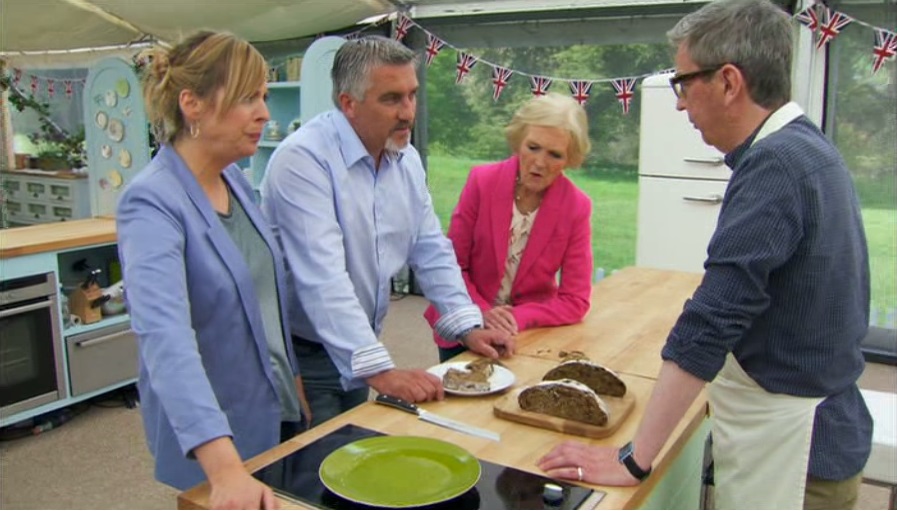 Another appealing feature (probably) introduced by MasterChef is that viewers can see multiple amateurs making the same dish in their own ways. Amateur contestants and professional judges offer practical advice, and show the recipe in action. GBBO's twist is the addition of nice illustrations of each contestant's Signature and Showstopper Challenges before they start making them. This gives the audience a visual expectation of each recipe. For the Technical Challenges, GBBO shows a standard professional version of the expected bake.

GBBO's Technical Challenges are also interesting because the two professional chefs judge blindly. This tells the audience that there are no favorites in the show.

Because GBBO focuses on the presentation and the contestants, they do not dig too deep in the details of the recipes. This has led critics of the first season observe that viewers learnt next to nothing about how they were actually making them. I think this is another reason for the show's success: the target audience is not bakers looking for new recipes, it's viewers looking for amazing-looking breads and pastries with a zest of drama.

No comments:
Email ThisBlogThis!Share to TwitterShare to FacebookShare to Pinterest

Shop Heroes is an item-shop game released on mobile and Kongregate in mid 2014 by CloudCade. The gameplay consists of crafting equipment for heroes, who then go on quests to find materials, which are used to craft more equipment. Players can gather in Towns to share the costs incurred by leveling up buildings, which unlock more heroes and quests.

CloudCade advertise striving for useability and superior gameplay. I understand that when they launched Shop Heroes, they were still a small studio. But their UI needs more work: it has too many screens, too many taps to start an action, too much information, and fragmentation/duplicate information. Sometimes, information is not just missing or duplicated. It's purposefully hidden, misleading, or manipulative.

An example of UI manipulating emotions is the Roulette, which gives players one random award among 12. The UI shows each award equally likely to happen - 1 in 12, or 8% each. Yet the actual chance of keys, gems, and blueprint fragments is less than 1%. Why raise players' hopes so high if it never delivers? So they get 10 seconds of fiero after 10 months of frustration? It's as if a slot machine displayed the jackpot symbol with the same chance as others, but was actually rigged to nearly never stop on it. The gambling industry actually forbids such machines. One could argue that the Roulette is a minor mechanic in Shop Heroes, and that players may understand that it's rigged. A sincere UI would make the area of a reward on the wheel proportional to its likelihood.

An example of UI purposefully hidding important information can be found in the screen where players build their quest teams. Players send heroes on quests dozens of times per day. When heroes are strong enough to tackle the quest, a green smiley is displayed above their head. When they are not strong enough, the smiley turns to yellow or red, showing that they are more likely to be injured. Injured heroes are unusable for several hours, so players strive for green smileys. But each of the 8 equipment slots of each hero has a 1-10% chance to break during a quest. Therefore players equip their heroes with just enough equipment to reach green smileys, so as to minimize the costs incurred by broken equipment.

Yet players noticed discrepancies in the odds of injury. They asked on the forum whether increasing power above green smiley reduces the chance of injury. The community manager did not answer clearly at first, saying it's fun for those playing to figure out, and that it's impossible to create a tutorial for every single detail in the game. Players replied that 1) they are not asking for a tutorial but for explicit numbers to be displayed, 2) core mechanics should not be hidden, and 3) discovering 1%-likelihood mechanics is annoying and time-consuming. The community manager eventually cleared the matter, but why was this important information not explicitly provided inside the game? The in-game UI should, and can, do a better job at displaying the chance of injury, however small it is. One way would be to display the green smiley only when the chance is exactly 0%. Another way would be to display the percentage number, rounded up (0.123% would be 1%). Providing feedback through numbers is the only way that hardcore players can theorycraft and reverse-engineer the most intricate mechanics.